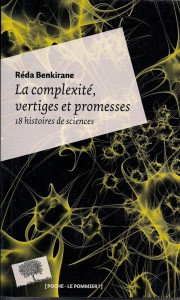 Réda Benkirane, La Complexité, vertiges et promesses. 18 histoires de sciences. Paris, Le Pommier, 408 pages, 2013.
[ Présentation | Presentation in English | Sommaire | Préface | Bibliographie | Notes de lecture | Articles de presse | Edition étrangère 1 | Edition étrangère 2 ]
The book deals with Complexity – the study of the "whole which is more than the sum of its parts" – as it is described mainly in biology, mathematics and physics. It is intended to be a textbook for managers, planners, strategists, financiers, social scientists and more widely for a general public interested to have a good grasp of science and technology. Through in-depth interviews with leading figures of the scientific community, this book aims at reflecting a wide range of ideas, concepts, researches and researchers closely related to Complexity and non linear sciences. The book includes a foreword, eighteen annotated chapters and a commented bibliography.
What is common to ants society, cyberspace and financial markets ? What is the grammar of emergence, the principles of self-organization ? How can chaos emerge from a purely deterministic system ? Can artificial intelligence compete with human intelligence ? Are there limits to computation ? Could quantum computing lead to the discovery of new mathematical truths ? Are Mathematics invented or discovered ? Are we going to assist to the rise of new forms of life – in silico ? Will new species, made of population of artifacts, take the power and the lead in civilization ? Is information at the origin of matter ? Can we extract the 'it' from the 'bit' ? What is the relevance of the so-called cosmological Anthropic Principle ? What is randomness ? What could and could not a deity? Why does God play dice not only in physics but also in mathematics ? Is He a watchmaker or a cosmic computer ? What happened before the big bang ? Is the universe unique or multiple, finite or infinite, mortal or eternal ? Is there a Theory of Everything ?

These are some of the fascinating questions that the book explores. The distinguished scientists who are interviewed strongly contributed to the study of complexity in a variety of disciplines and research fields. The book introduces and updates their contributions and reveals new – non linear – avenues in the making of science.

Reda Benkirane is a sociologist and information specialist. He is consultant for the United Nations and NGOs in Geneva, Switzerland, and works essentially on Knowledge Society and Intercultural issues.