Opening Presentation to the International Conference
'Science, Cultures and the Future of Humanity Could Knowledge,  Spirituality and Action Re-Shape the World?'
Doha, Qatar, 28 May 2008 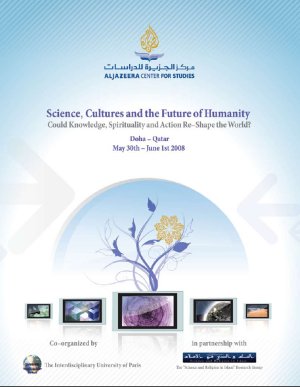 Science, Culture, Society, Economy, Politics, every field of our multifaceted reality – even the biosphere itself – is now driven by an unprecedented pace of change. An increasing complexity is at work at the different scales of our physical world. What is occurring now with the exponential growth of scientific knowledge and the advent of the digital revolution is leading us to an anthropological mutation of humanity as a species. This was unthinkable and unforeseeable a century ago for individuals who, generations after generations, were living in the same neighborhood, learning the same knowledge, doing the same work, subjected to the same culture and locked in the same social class. How can we apprehend the change that is affecting us? Do we have the intellectual tools to act adequately against the dark face of change, which is leading to pollution, reduction of biodiversity, rarefaction of natural resources, and climatic change?

Do we have the grammar, principles, and theorems that can shed some light on this challenging complexity which anyonecan intuitively perceive but which remains, from a strict Cartesian logic, out of reach?
We are living the Golden Age of Complexity. And a “paradigm shift” is now occurring in our cultures. At a moment of power shift in economy and politics and of radical modifications in our access, production, and sharing of knowledge, the strangeness of the Others (Muslims, Chinese, dense populations from the South) appears as something monstrous. We, the Non-Euclideans! Therefore the most important intellectual challenge of our time is to transform the imperative of interdisciplinary dialogue into an intercultural exchange and to deepen, outside in vitro and in silico worlds, the understanding of emergence and complexity culminating in man and in society.

There is no doubt that what we are currently witnessing is a Hyper-Renaissance. During the next 30 years, an intellectual tsunami is going to transform almost everything on the surface of this planet. At the same time we must acknowledge that a global crisis of meaning and a metaphysical anxiety are affecting all of us; furthermore, our way of life, how we are transforming our spaces, our societies, and our resources are making our world theworst of possible worlds. So we have to confront this highly uncertain state of existence, with both a new birth of cognitive and spiritual realms and the almost inevitable approach of a final hour due to our selfish, supremacist, violent and consumerist urges.

If I had to choose one word to describe the current situation of humanity, the world “complexity” might be the best candidate. That is because we can easily, intuitively, perceive that society, economy, politics, and almost every field of our reality – even the biosphere itself – express the interlacing of events, the criticality of tiny phenomena that may end up with catastrophic consequences, and the uncertainty of the future.

Classical science, which started with Galileo, Newton and Descartes, was based on reductionism. This scientific methodology consists in dissecting any system into the parts that make it. This allowed science to exert its power and control on nature in an unprecedented way. Huge scientific discoveries and technological innovations are direct outcomes of this reductionist approach. But three centuries after Newton, science is now adopting a new view of reality; most natural phenomena around us are non linear, irreducible, unpredictable, and erratic. So Science is now producing new paradigms that seek to capture the pattern of things, the movement with its uncertainty, not the precise outcome. Life is now seen as a creative and fragile ballet between chaos and order. So Science is becoming the catalogue of patterns that nature deploys in a colossal creativity.

Complexity designates phenomena for which the "whole is more than the sum of its parts". To explain what complexity is, we can provide some examples: Internet, financial markets, progression of pandemic diseases, evolution of political regimes, brain functioning, genes network, the list is huge and diverse. Complexity is not, however, synonymous with complication; for example a watch or an automobile have very complicated mechanisms, but are not complex, since they can be taken apart and reassembled to get the initial object.

Complexity is characterised by non-linearity (when causes and effects are not proportional), by emergence(when properties of a system are not reducible to those of the basic components) and finally by evolution of a system in time.

Complexity is a science that describes natural, cultural, social, and political phenomena which are beyond our control and the horizon of predictability. If we understand the properties of emergence, self-organization, chaos, if we become well aware of the limits of predictability, we can better understand the nature of Nature and we may learn to better interact with it.

Complexity theory contributes to make science a more realistic and a more modest quest. It demonstrates the limits of science as we knew it since Galileo and Newton.

Ideas and concepts of complexity have a profound implication on the way science is nowadays thought and practiced. The situation is somehow similar to the crisis that happened with the discovery of non-Euclidean geometry. New strange mathematical objects were discovered outside geometries and perceived first as monsters. But the non-Euclidean realm opened the way to major scientific revolutions in the past century such as Einstein’s theory of general relativity.

In a certain manner, we are discovering the non-Euclidean nature of the world. At a moment of power shift in economy and politics and of radical modifications in our access, production, and sharing of knowledge, the most important intellectual challenge of our time is to transform the imperative of interdisciplinary dialogue into an intercultural exchange, and to deepen, the understanding of emergence and complexity culminating in man and in society.

As a science of relations, of networks, nodes and links, Complexity allows us to understand why, for example, uncertainty generates fear, incomprehension and mental uprooting that are so patently expressed North and South of the planet in populist political movements and religious and economic fundamentalisms. All the current crises that are occurring in International Relations express the difficulty to admit the non-Euclidean reality that our world is not flat but politically multipolar and culturally diverse. Complexity is the only scientific theory that may explain how different worldviews concerning the same and unique world can all be simultaneously legitimate and valid.

Complexity is in fact a universal declaration of inter-dependence. We must understand from a scientific perspective but also from a spiritual perspective that what affects our brothers and sisters on the other side of the planet may have, one day or another, fatal consequences for us as well. Complexity shows that humanity is engaged in a collective destiny while being at the same time a geophysical force that is deregulating even the climate. We are all in the same boat, so – if there is still time – let us divert it from a Titanic route and fate.

The September 11 events have clearly demonstrated that in our asymmetrical world the weakest can sometimes destabilize if not defeat the strongest. In fact the weakest in these times might be the fittest – since he has nothing to lose – in the struggle for existence, as only the quickest may – since he has nothing to lose – survive. The “global war on terror” has shown that we have not learned anything, since we are blindly perpetrating the obsolete science of control and manipulation on something that is intricate and non-linear. What we urgently need is to use the tools of Complexity to reverse the process of self-destruction, to break the cycle of violence, humiliation, and exploitation and start to build alternative futures. Let us all learn, thanks to knowledge and spirituality, how to use the pharmakon not as a poison but as a remedy. Let us, We the Non-Euclidean, the human rainbow, people of science and of faith, artists and activists, be the medicine men, the acupuncturists of this endangered world. Let us take care of the Inner Self of Humanity and free our societies from fear and disinformation.