A World Beyond Physics: The Emergence and Evolution of Life, by Stuart A. Kauffman 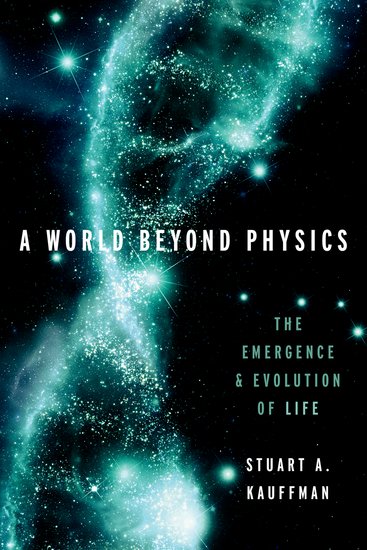 Stuart A. Kauffman, A World Beyond Physics: The Emergence and Evolution of Life, Oxford University Press, 2019 – 320 pages.

How did life start? Is the evolution of life describable by any physics-like laws? Stuart Kauffman’s latest book offers an explanation-beyond what the laws of physics can explain-of the progression from a complex chemical environment to molecular reproduction, metabolism and to early protocells, and further evolution to what we recognize as life. Among the estimated one hundred billion solar systems in the known universe, evolving life is surely abundant. That evolution is a process of « becoming » in each case. Since Newton, we have turned to physics to assess reality. But physics alone cannot tell us where we came from, how we arrived, and why our world has evolved past the point of unicellular organisms to an extremely complex biosphere. Building on concepts from his work as a complex systems researcher at the Santa Fe Institute, Kauffman focuses in particular on the idea of cells constructing themselves and introduces concepts such as « constraint closure. » Living systems are defined by the concept of « organization » which has not been focused on in enough in previous works. Cells are autopoetic systems that build themselves: they literally construct their own constraints on the release of energy into a few degrees of freedom that constitutes the very thermodynamic work by which they build their own self creating constraints. Living cells are « machines » that construct and assemble their own working parts. The emergence of such systems-the origin of life problem-was probably a spontaneous phase transition to self-reproduction in complex enough prebiotic systems. The resulting protocells were capable of Darwin’s heritable variation, hence open-ended evolution by natural selection. Evolution propagates this burgeoning organization. Evolving living creatures, by existing, create new niches into which yet further new creatures can emerge. If life is abundant in the universe, this self-constructing, propagating, exploding diversity takes us beyond physics to biospheres everywhere.